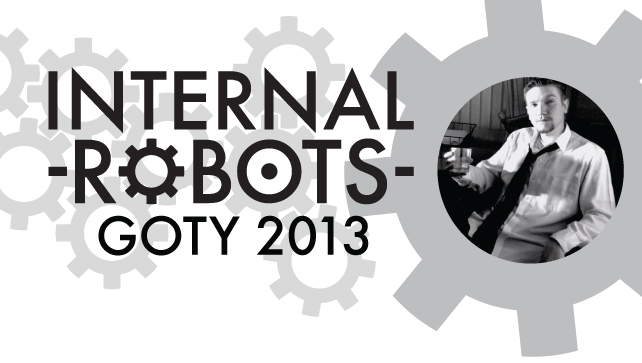 David kicks off the IR GOTY content for 2013 with his favourite titles from the past year.

It has been a very interesting year in the world of video games. Obviously there’s the long-awaited start of the new generation (even if that isn’t getting off to the best start), but there’s been a world of controversy, royal f–k ups and terrible decisions throughout the year. Having said that, 2013 has brought some truly amazing games to our distraction-craving brains. While there were few big titles making appearances as the previous generation wound down, that didn’t stop a few gems from sneaking in before everyone forgot about Mr. Xbox 360 and Mrs. PS3 (arbitrary assignment of genders, I assure you). What’s more, this allowed the small and indie titles to take their place on the stage – a good thing too, as I found myself with much more free time and far less money in the backend of the year.

2013 was a year of crappy-looking empathy and beautiful personal stories, with games like ‘Depression Quest’, ‘Cart Life’, ‘Papers, Please’, ‘Gone Home’ and ‘Brothers’ achieving such amazing things with such simplicity and little scope (when compared to the exploding apocalypse of armageddon scenarios of mainstream games, I mean). It’s been had to weigh these up against the roller-coasters and high-spirited romps that I have also enjoyed so much this year, but that’s definitely not a bad position to be in. 2013 took some real chances with games, and I like to think it pulled it off with some great success. If the storytelling and emotion that occurred this year can continue into the next generation of games, I think we’re in for a really interesting few years.

Honourable Mentions: I would like to give credit to those few games that very almost made their way onto my list. In no particular order… ‘Gunpoint’ combined some great hacking freedom with some of the most amusing writing this year. ‘Year Walk’ made amazing use of its platform and some really unique game design to tell a truly chilling story, making it the only horror game I enjoyed this year. ‘Skulls of the Shogun’ surprised me with such tight but varied strategy, it really was a lot of fun to play. Finally, ‘The Swapper’ tied a unique visual style with some inspired mechanics, and that ending… just brilliant.

I will also acknowledge the likes of ‘A Link Between Worlds’ and ‘The Last of Us’ as games that I feel would have been strong contenders for my list, had I found the time to experience more of them. Oh well, onto the list!

I put a great deal of time into DOTA 2 this past year – the majority of it was pretty enjoyable, the rest was the fault of real people. As a game, I think DOTA 2 is pretty damned great. There’s such terrific depth and diversity, elaborate tactical and strategical nuances, and just provides you with so many satisfying moments. But what Valve has built around this solid gameplay core may be the most impressive thing of all; an ever evolving network of unique viewing, learning and community material and systems. The learning curve is harsh, your allies can be chumps, the opposition can be brutal, and people are always going to be assholes, but find even a single person with whom you can regularly play, and that is all so easy to deal with. That was DOTA 2‘s shortcoming for me and why it isn’t significantly higher on this list – I never had someone to play with on a regular basis. Pity. 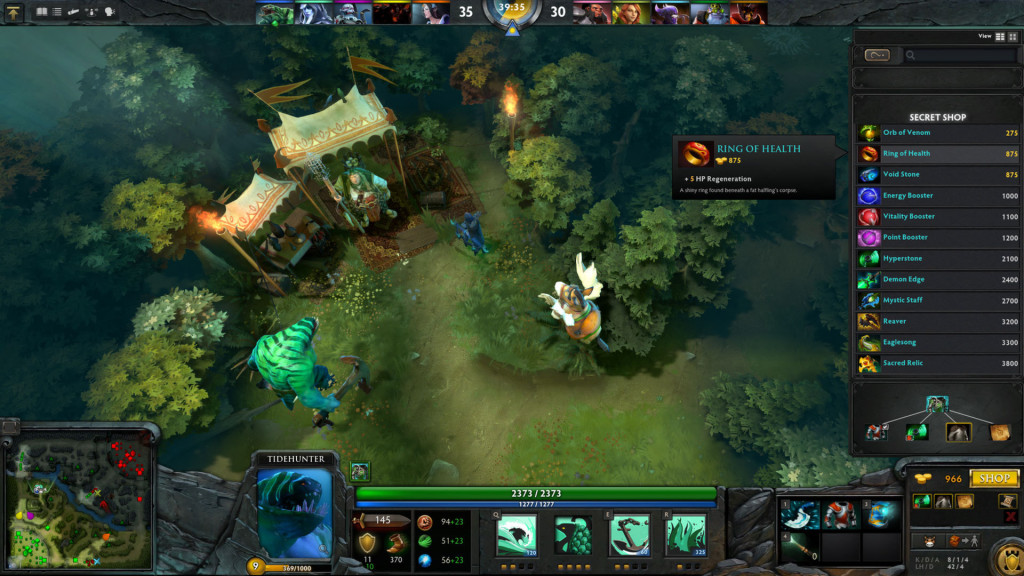 9. Brothers: A Tale of Two Sons

It took me a while to start appreciating Brothers, an issue exacerbated given how short a full play-through is. Controlling the characters with their respective thumb-stick proved to be the biggest mind game of all in an otherwise simple environmental puzzle game, though I never considered the controls to be outright bad, just a challenge. My problem was more that I was overcoming this challenge in order to move through some easy movement puzzles and traverse some (admittedly beautiful) environments. About halfway through the game, however, a more personal story started to emerge and it all started to slot into place. I shan’t ruin it here, but the ending brings it all together perfectly, with everything paying off wonderfully. A really quick and simple playing game, with a beautiful world, story and music. 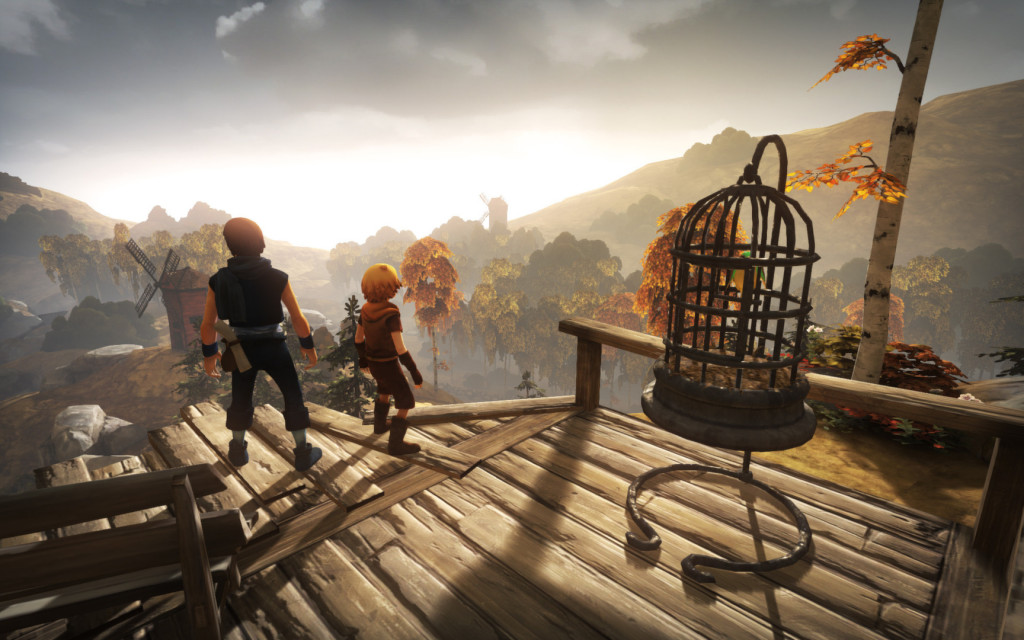 I backed Shadowrun Returns on Kickstarter. The world, the story, the genre and the style all really clicked with me. I was delighted by the fact that I wasn’t let down. I covered a lot of the ups and downs of the game in my review earlier this year, so I won’t go into all that. What I will say is that Shadowrun Returns provides a vibrant world and then sets you free in it with a wealth of options in armaments, tactical approaches and characters. I’ve been wanting to come back to it for some time, and eagerly await the release of the Berlin Campaign in January. 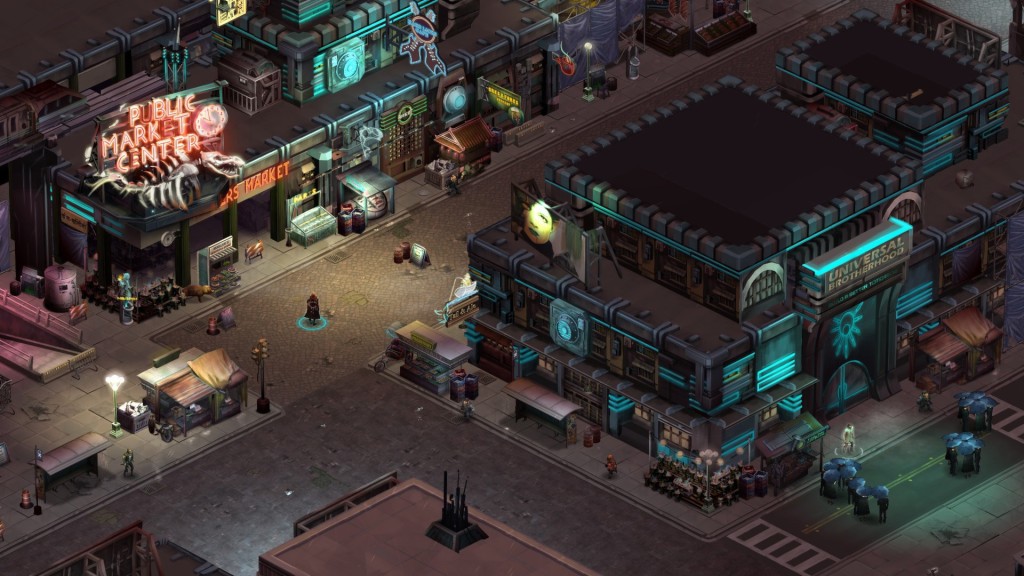 7. Starcraft II: Heart of the Swarm

The thing that set Starcraft II: Heart of the Swarm apart from Wings of Liberty, so that I didn’t just toss it up as more of the same, was probably the mission variety. While it is of course true that it had its own continuing story, a different race to play with and reconstructed upgrade paths, all of that could have easily felt like new window dressing on a window that I already dressed. Why are we dressing windows, anyway? Point is, Heart of the Swarm serves up a string of incredibly varied mission goals, controls and scenarios and made it a genuine treat to return to Starcraft II. And it certainly doesn’t hurt that those window dressings came with the expected Blizzard quality and polish. 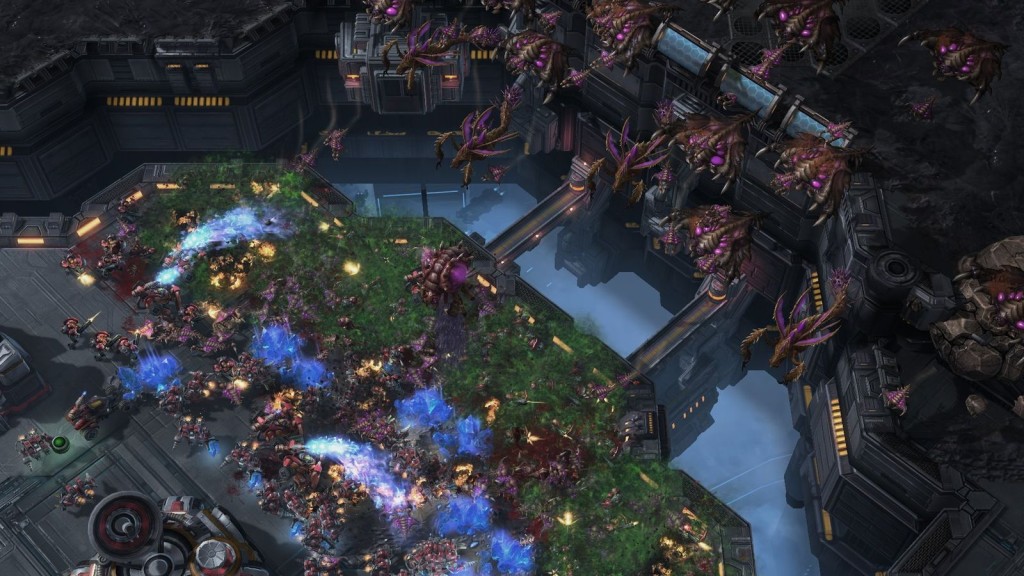 I had really high hopes for Saints Row IV, so it speaks to how great it must be that it has lived up to these expectations even a little. If it had of been better than Saints Row: The Third, then I’m sure it would have been a strong contender for #1, but as it is, Saints Row IV is more of an expansion upon The Third. Albeit, it is a huge expansion with crazy superpowers, universe-conquering aliens and ridiculous sex scenes. As I covered in my review, Saints Row IV rehashed a few too many elements from the previous game, including the basic setting, but what it lacked in originality, it made up for in pure delight and ridiculousness. Just plain, stupid fun. 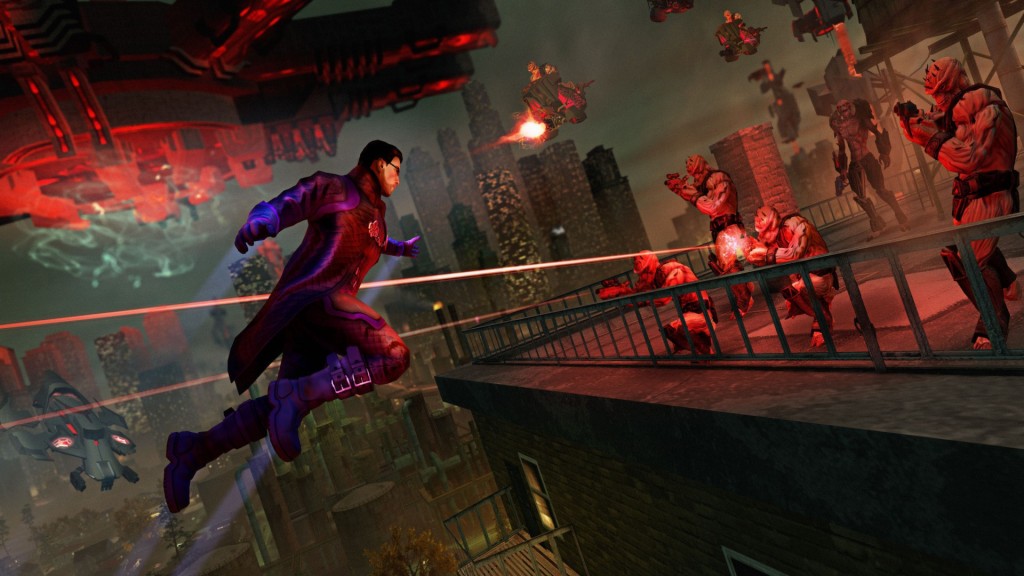 I intentionally avoided all possible information about Gone Home once I decided I was going to play it. I knew the initial setup of a girl coming home from abroad and that it was primarily exploration of the environment. Beyond that I had no idea if it was going to wind up being a chilling horror story, a charming family get-together or if the whole house would take off and I’d wind up in a thrilling sci-fi space war (though that’s not where I’d have placed my money). I think Gone Home is at its best when approached this way. The Fullbright Company has laid a very clever series of threads that could suggest one thing, or be explained away by another thing. Because of this, I was on edge the entire time I was playing, and never knew if I should be or not. All the while, it tells a touching and personal story with a fascinatingly detailed house.

Right from the title screen I had a good feeling about Papers, Please. This feeling would be short lived, as I would promptly be crushed under the weight of administering the ever-increasing levels of bureaucracy you find on the borders of Arstotzka. Papers, Please sets out to put you in the overly scrutinised, often hated position of immigration inspector, giving you a growing list of restrictions on who you can let into your glorious nation, whilst you try and provide for your hungry, cold and sick family. But being a good (and paid) inspector frequently means being a complete dick, as so many people with spectacularly good reasons to enter the country approach you with ever-so-slightly invalid documents, and the choice is yours. Papers, Please is a unique experience and a wonderful achievement, both in spirit-crushing gameplay and strangely varied story paths (there are 20 possible endings!). Glory to Arstotzka! 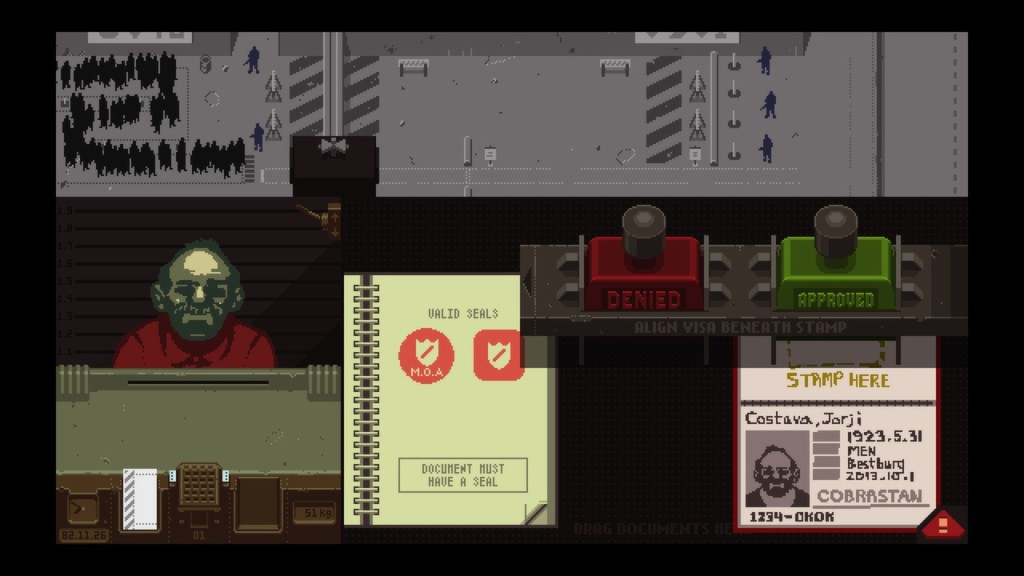 The joy and challenge I found in XCOM: Enemy Unknown (my #1 GOTY 2012) ultimately led to my seeking Fire Emblem: Awakening. So I bought a 3DS. Might just be the best decision I’ve made this year, and while that view is helped by the likes of Animal Crossing: New Leaf and Luigi’s Mansion: Dark Moon, you’ll only find one 3DS game on my list this year. Fire Emblem: Awakening combines tactical depth with characters you can really get to know and care about. The story is decent enough, and the characters mean you become so much more attached and mourn their deaths even more than you would just for their stats, but it was the deep and varied tactical combat that really made this game for me (which I’ll grant is in part due to the characters as their relationships come into play on the battlefield). For anyone looking for more turn-based strategy, be you a veteran of the genre or only just starting out… Fire Emblem: Awakening. Go. 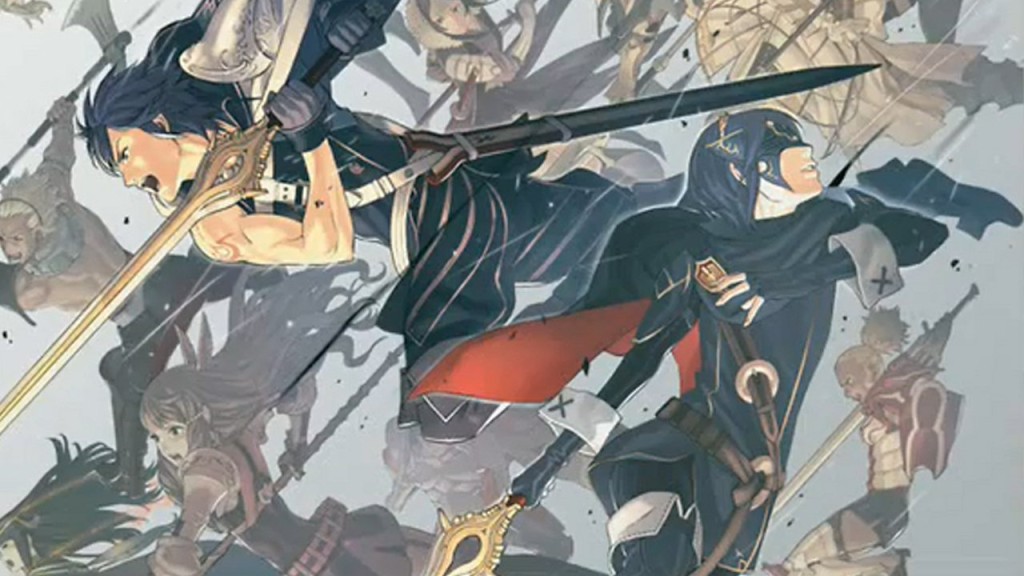 The Devil May Cry series has never really appealed to me, so it took me almost a year to finally get around to picking this reboot up. I am so incredibly glad that I did. DmC brings a such a level of accessibility to the series, with such tight controls, a wide array of abilities and fluid animations, combat just looks and feels amazing. Not to mention the characters, story and setting are just oozing with style and attitude. Ninja Theory have just managed such high quality across the board – extraordinary level and visual design, interesting characters, an over-the-top but entertaining story and great sound design. You can find further praise in my review for it. An amazing game. 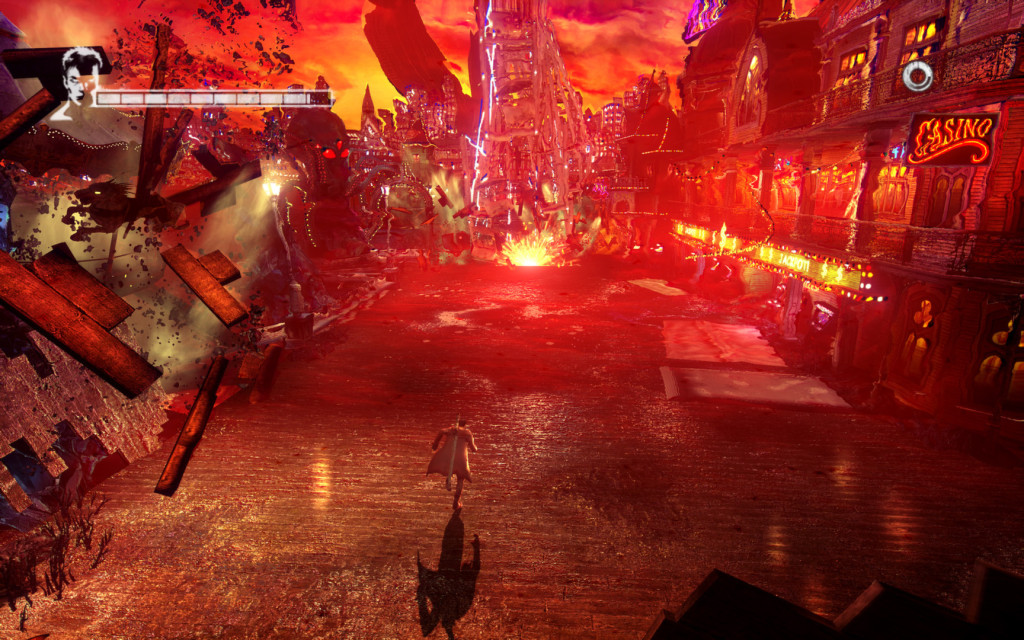 Even just a little way into BioShock Infinite, I had little doubt it would be finishing high on my end of year list. It starts with some cryptic intrigue to draw you in, then BAM! 20 minutes in and you are enveloped wholly into the breathtaking world of Columbia. BioShock Infinite does such an amazing job of creating such a fully realised and realistic, but at the same time utterly fantastical, world. Art design, characterisation and writing, and music all combine to place you entirely with Columbia as you set out to investigate, both in player and in character. From there, Infinite throws some creative combat your way – some initially stock-standard guns, but some varied and interesting powers that are just a treat to play and experiment with, and then there’s the curve-ball of the skylines that allow such rapid movement and changes in the flow of a fight. Infinite‘s story takes many twists and turns, some earned or pulled off more than others, but all creating a roller-coaster of an adventure that shows off the rich world and allows for some great character interactions. The end, or rather the several sequences that play out in the closing hour of the game, might just contain some of my favourite moments of all time. Replaying Infinite, as I did almost immediately, is a very different, but still amazing experience, as you witness and comprehend the hundreds of threads that all flow down from the final moments. Congratulations and thanks to Irrational for crafting such a brilliant experience. 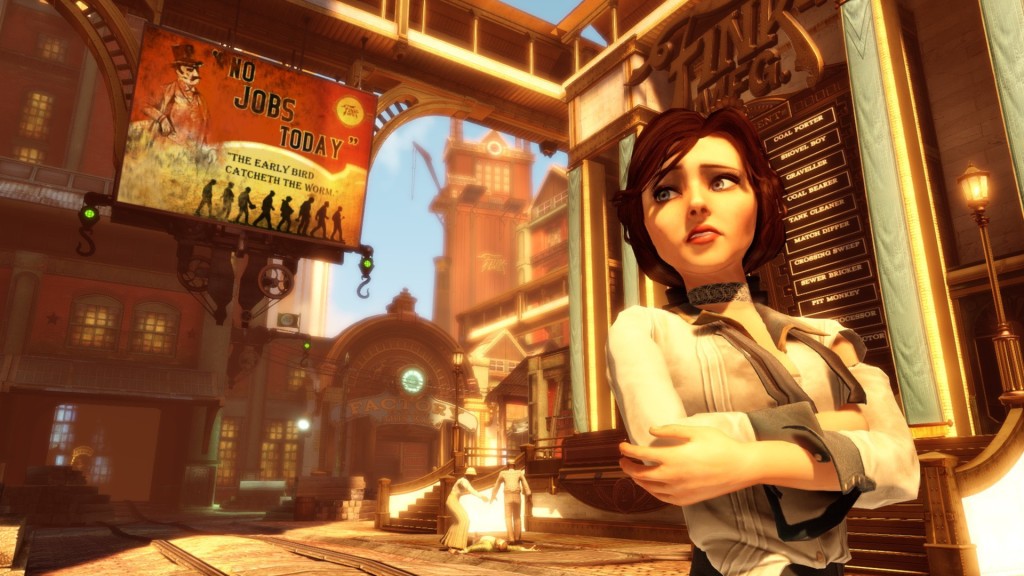