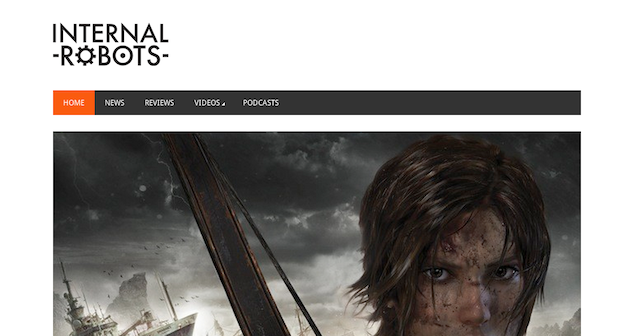 Oh hi there, I didn’t see you come in because this is the internet and unless you were live-streaming your first visit to this site I can’t see you at all. If you were doing just that… sorry, I wasn’t watching. Anyway, welcome to Internal Robots!

Internal Robots is a little project I’ve been working on in one form or another (mostly the forms that are exclusively found within my brain) for quite some time. It’s a place for myself and a few of my co-collaborators to play some games and then talk about them, or about anything else that happens to come up I suppose. We were doing it anyway, so might as well slap it on the interwebs and see if anyone else wants to join in on the conversation.

I’m David Way. I’ve spent most of my life playing games in some form and in the last several years have taken a keen interest in games journalism and media. I recently earned my degree in Media Production and was looking for something to do with my skills that was little less intense and demanding than making another film, but instead allowed the fun parts of making media to run free. I recruited several people to join me on this adventure, including one Domenico Perri who also conveniently helped me build the website (I say helped me build, I mean built). Dom also piloted our first gameplay video of Portal 2, where we were also joined by Lachlan Foss. As for the rest of the crew, I’m sure you’ll get to know them as they appear in other productions.

The idea is to have a good cross-section of content up within the first week. There is already the aforementioned Games Revisited: Portal 2 video. There was meant to be a First Impressions video for the new Tomb Raider with Trystan Foss, but then he went and had a baby so scheduling didn’t work out too well there. There is, however, my review for Tomb Raider up on the site.

The next major piece of content we have lined up will be as yet unnamed podcast, which we will hopefully get to recording in the next few days. Said podcast may be done after what could potentially become an External Robots video, but we’ll have to wait and see how that turns out. Everything else will happen as it happens, so I guess stay tuned – your best bet for regular progress updates would be Internal Robots‘ twitter feed.

Until next time, enjoy what is on offer, engage and share as you see fit.