Since its launch in 2006, the Xbox 360 has slowly transitioned into an entertainment hub. Though Microsoft initially sold the hardware on the promise of a powerful platform for online gaming, the unique-selling point was soon relegated to the role of ‘one of many features’ and services such as HBO Go were given their spot in the limelight – an attempt to fuel sales in a wider and less video game-driven market. So when Microsoft began teasing their Xbox 360 successor, it was fair to assume the entertainment angle would be plugged further. I also thought it was fair to assume Microsoft would forego numbering in the product’s name to tell consumers that it’s not just their next game console; it’s a whole new beast. At least I was right on one theory.

Xbox One is the name Microsoft has chosen, putting to rest countless rumoured names, and to me it makes sense – it’s banked as your ‘all in one’ entertainment box. But does it make sense to the average consumer? As someone who keeps up to date with gaming developments, the name has context and I understand Microsoft’s proposition. But the same can’t be said about other consumers, especially when the repositioning of the Xbox brand is to appeal to a market that isn’t traditionally game-savvy.

Recent years have shown poorly chosen names and the associated unclear messaging to be detrimental to hardware sales. Less than a month ago, Nintendo’s President and CEO Satoru Iwata acknowledged the consumer confusion that’s hurting potential Wii U sales; specifically, that too many consumers think the product is simply an Wii upgrade, not a new system. In fact, Nintendo even emailed their entire Wii install base to explain that Wii U is a completely different console. Nintendo stumbled into this same pitfall two years, struggling to tell consumers the DS and 3DS were indeed different systems. Months after the 3DS launch, I still had many friends who hadn’t realised the two devices were separate platforms, and these are people who play a lot video games. If the difference isn’t obvious to them, it certainly won’t be obvious to parents and non-gamers, either. 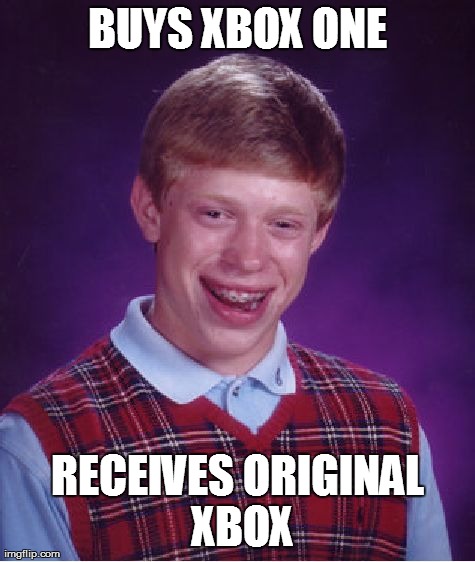 The tendency to see new hardware as a mere upgrade is understandable, considering the smartphone/tablet trend of releasing an (marginally) upgraded device every 9-12 months. But this is the landscape Microsoft must inevitably face, and part of their plan is undoubtedly the significant repositioning of the Xbox brand into the entertainment space – if they can adequately communicate the myriad of new features, the Xbox One will easily be perceived as a next-generation device.

However, this strategy could have a fatal flaw that is dependent on one question: Is the Xbox brand too synonymous with gaming? It’s possible Microsoft could pump the entertainment angle as hard as it can but never escape the attachment to gaming, purely because of the word ‘Xbox.’ Yes, the Wii was able to successfully enter almost 100,000 homes worldwide, but it had an original and catchy name. Nintendo’s previous console, the Gamecube, may have sold relatively poorly, but the Wii utilised an unshackled brand that stood for nothing other casual and family-friendly gaming. Unless Microsoft wants to ditch the Xbox brand, which they wouldn’t, they’re stuck with the hard sell.

Whether or not the complete repositioning of the Xbox brand and the release of the Xbox One are successful will be determined by communication. And bearing in mind Microsoft is still having a rough time getting its story straight with Xbox One’s internet requirements and used game policy, communication isn’t proving a strong point. But as the console was announced less than a week ago, it would be unfair not to give Microsoft the benefit of the doubt, because there’s no reason the messaging can’t be made clear in the coming months. Remember that iTunes was transformed from a music library manager into an all-purpose app store without consumer fuss because the messaging around the movement from iPod to iPhone to iPad has remained logical and unobstructed. You heard me, Microsoft – just copy Apple.