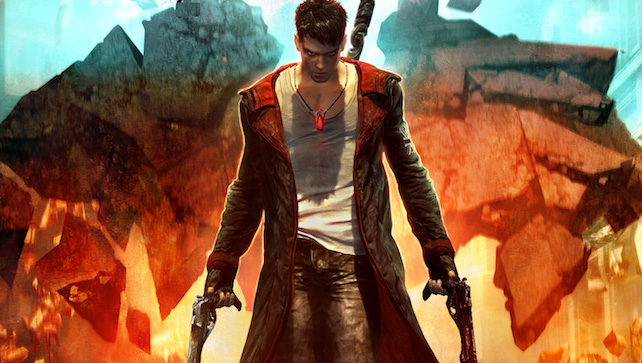 Faced with the always daunting challenge of rebooting a long-running, beloved series, Ninja Theory has outdone themselves in creating not only a great game in its own respect, but one that maintains and reinvigorates the core values of the Devil May Cry series. DmC: Devil May Cry offers a strangely well executed B-movie-esque story set in a concisely explained, but incredibly stylish world, featuring a small cast of vibrant characters.

The story pits Dante against the hordes of the demon king Mundus, with the encouragement and periodic help of brother Virgil, and the guidance of psychic-witch Kat. For the most part, Dante is left alone to fight in Limbo, the distorted demon realm that exists on a separate plain to the modern city setting of the real world. Dante will be pulled into this world, as buildings and environments warp around him and demons emerge from nowhere, following concise orders such as “KILL” or “STOP” that appear on the environment around them.

It is this alternate world, and the transformation to and from it, that brings a great deal of DmC’s amazing sense of visual style. The art design is wonderfully cohesive, richly coloured and is utterly its own. Whether it’s the modern city collapsing to swallow you whole, the shattered chunks of architecture stretching out across an empty but awe-inspiring abyss, or the vastly extrapolated innards of a factory and warehouse, the world of DmC offers so much variety and unique encounters that there’s never not something visually interesting on screen in this twisted reality. Furthermore, the visuals are accompanied and accentuated by an incredibly appropriate and well-used heavy electro/techno soundtrack.

Protagonist Dante has been completely redesigned, served up as a self-absorbed playboy deviant. While this character garners little empathy from the player to begin with, it’s refreshing and just plain fun to play a character with such a devil may care (sorry) attitude. Dante does of course evolve and progress as he learns about his family, his past and the demons that threaten his life, and the lives of all humanity. This is all supported by some great acting across the board, the appropriate and skilled application of performance capture, and some great and often quite humorous writing.

For all the praise I will give the characters, story and world, combat is where DmC really shines. Players (and Dante) are introduced to a full arsenal of weapons as they progress through the game, starting with just Dante’s sword, followed by his dual pistols a few minutes later, and eventually a series of different Angel and Demon melee weapons, and a few gun variants. At any time, each of these weapons is only a button-press or modifier away. A level in Dante is granted the ability to summon an angelic scythe and a demonic axe, a feat achieved in an instant by holding the left and right triggers respectively. Combat becomes a fluid, ever-changing string of combos as you switch effortlessly between three or four weapons in moments, each weapon possessing its own unique characteristics, combos and applications. For example, the slow-swinging, heavy axe is ideal for destroying the shields of some enemies, whilst the scythe’s long reach and wide attack arcs renders it more suitable for dealing with groups of enemies. 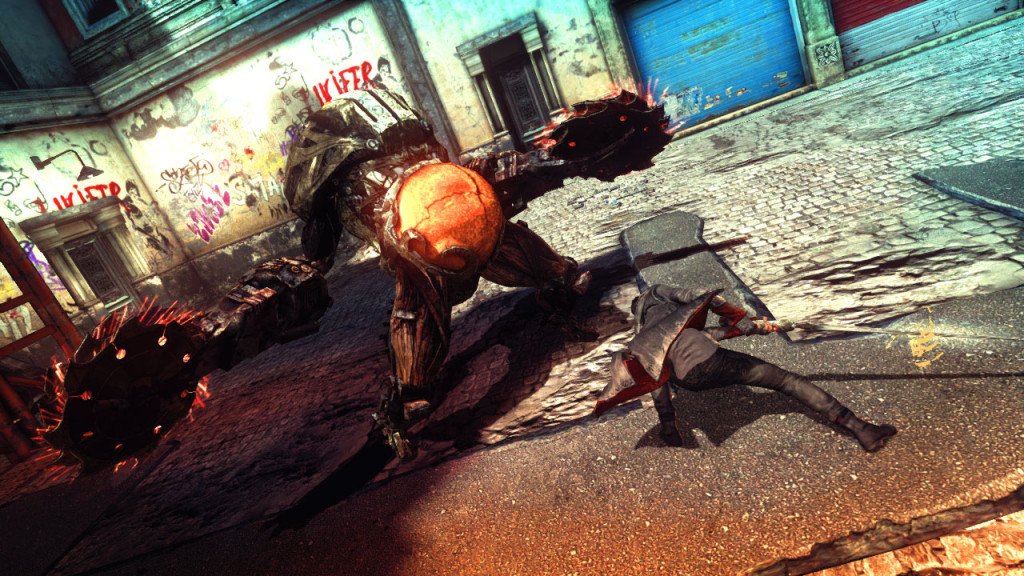 The combat is fast, fluid and all over the shop. Grapples, throws, jumps and rushes all allow the player to move quickly between enemies, whether they be in the air, on the ground or travelling between the two. The classic DmC style rating returns to encourage players to vary their practices, gaining higher scores for air attacks, juggles, combos and use of multiple weapons. These scores provide you with points to spend on new combo moves or improving existing ones, either by making them hit harder, or expanding on their functionality. Later in the game, you will gain access to Dante’s Devil Trigger ability; a meter that fills up in combat, and is released to throw enemies up in the air for you to slaughter with increased damage and healing over time. At a glance, the controls and various combos can seem daunting, but the staggered introduction of different weapons and moves, and the intuitive, intelligently designed layout means you will always feel in control of what you’re doing.

You will also find items in the world, which can also be purchased with the souls you accumulate from your enemies, that allow you to heal, resurrect or gain Devil Trigger juice (though use of these will apply a penalty to your final score), or extend your health and Devil Trigger meters.

The animation is up to the task, looking just as smooth as the action itself, something that could have easily suffered given the constant rapid directional changes and weapon switching. The camera control is nearly ideal for the style of action; intelligent enough that you rarely have to worry about it during combat, but still giving you full control when you need it, and generally avoids being disorientating.

While the game isn’t overly long for a single play-through - 8-10 hours with a not insignificant number of cutscenes - the game does offer plenty of options and motivation for replay. Whilst notably easier than the often punishing previous entries in the series, DmC does offer several standard difficulties, as well as several unlock-able difficulties that do more than just crank up HP and damage, e.g. changing the types of enemies in encounters, or making everything (including Dante) a one-hit kill, or - if you’re particularly nuts - just Dante. There are also several collectibles and challenge rooms spread throughout the levels, many of which won’t be accessible on your first visit due to the staggered introduction of weapons or abilities. All of these contribute to your score, making your Dante more powerful, so you’ll want to gather all that you can. Finally, every level (split by each difficulty) is detailed and itemised on the leaderboards, which are made accessible from each mission completion screen.

DmC: Devil May Cry is a model example of a successful reboot, and just a straight up great game. Ninja Theory has created an immensely fun and satisfying combat system, wrapped it up in a world that just oozes style, populated it with well designed, written and acted characters, and given numerous reasons to keep coming back. If this is the basis for the continuation of DmC, I’ll be very much looking forward to whatever comes next.

NB: DmC: Virgil’s Downfall DLC is available, with a reportedly distinctly different flavour of combat, a new story, and generally positive reviews. I have not played it at this time, but fully intend to do so in the near future.

One thought on “DmC: Devil May Cry Review”