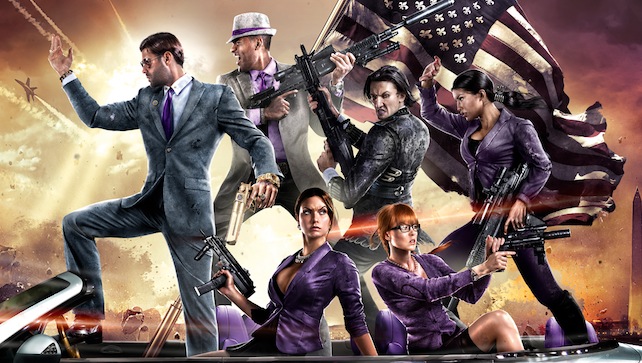 The Saints Row series has become the poster child for all that is pure ridiculous and deliriously fun. Saints Row IV by no means disappoints in this; managing to raise the bar even further in it's outrageousness whilst tying the whole series together. Unfortunately, it is this reliance on it's previous titles that ultimately lets it down.

While the details behind it haven't been made entirely clear, Saints Row IV seemed to have started out as an elaboration on the Saints Row: The Third DLC "Enter The Dominatrix". Because of this, and the fact that it survived the THQ bankruptcy and sale of developer Volition, it is perhaps understandable that SR4 at times feels more like some sort of "Saints Row: The Third 2" rather than a full sequel. A large part of this stems from most of the events taking place in almost the exact same city as the previous title, but also many of the mechanics that have been carried over near verbatim (e.g. character customisation, most of the character upgrades), and many of the story elements. The mini games used to take over territories are back too, though most of them new or at least appropriately different. For the most part they feel less repetitive and annoying as some of the worse offenders from SR3, but a few are definitely questionable.

The core gameplay, however, is radically different from SR3, and manages to set itself far apart through combat alone. The premise of SR4 is that you, The Boss, now President of the United States of America, have been trapped inside a virtual computer simulation of your city. Knowing this, it is a simple matter of a quick hack here, a quick hack there, and you've got yourself some super powers. That's right, it's The Matrix. It knows it's The Matrix. And it's the best damned Matrix game you've ever played. Also, aliens did it.

The superpowers you earn, customise and improve make combat immensely satisfying and potentially incredibly varied.  From lobbing magic firebombs to punting enemies off the screen, combat makes you feel powerful - like you should when you have super powers. Beyond some initial ability cooldowns (that become increasingly negligible with upgrades), the ease, speed and frequency that you may use these powers makes every combat scenario a treat. Of course you still have access to a variety of the usual kinds of weapons, but on top of this is a whole mess of strange and unique alien weapons for you to mix up with your powers. A black hole gun that sucks everything in the vicinity into a singularity, or a dubstep gun that kills enemies to the beat, it's all ridiculous but incredibly fun to enact and watch the mayhem unfold.

Traversal through the world is perhaps the most revelatory aspect of SR4. While the driving in SR3 was great, there sure was a hell of a lot of it. Driving around the same city again may have been a huge nail that brought along its own coffin, so it's definitely for the best that the game requires you to spend maybe 10 minutes in a car throughout the entire game. The option is still there, and works just as well as it did in SR3, but instead why don't you leap a dozen storeys into the air and shoot forward into the side of a skyscraper, sprint up the side 5x faster than any car before leaping off the top and gliding halfway across the city. Seriously. Why not do that? I have never had as much fun moving around a world as I did in Saints Row IV.

They give you a reason to do so as well, as if the sheer joy and speed of it wasn't enough. There are hundreds of glowing "clusters" on top of buildings, or on walls, or hidden in the ground, or just about anywhere. These act as the currency you use to upgrade your super powers. There are a couple hundred more available than you need to fully upgrade everything, but you'll definitely want to be collecting a lot of them as you move about the world - not just as you need them. 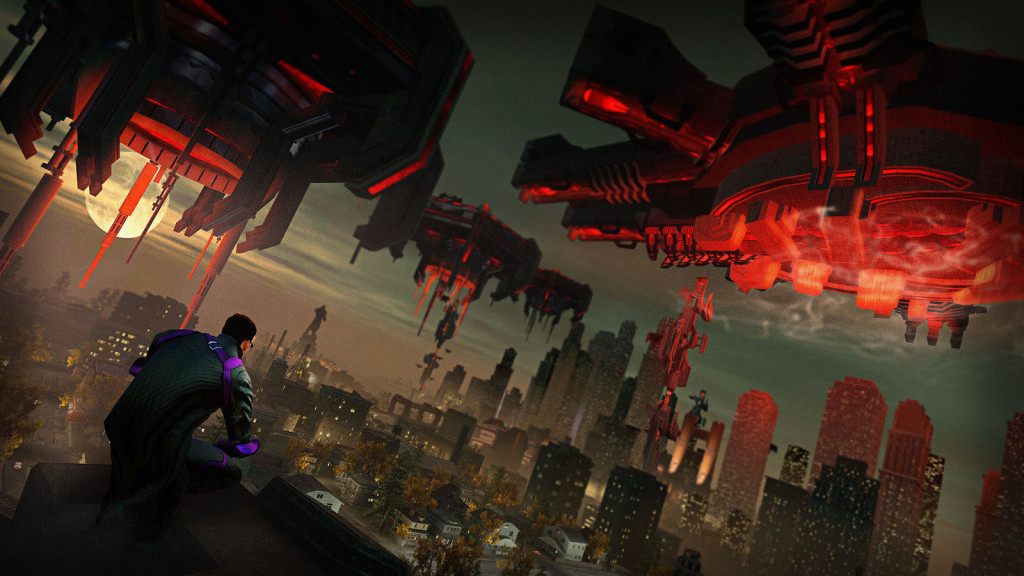 The writing in Saints Row IV is as strong as it has ever been - just scroll back up a bit a reread that premise. There was a high risk of SR4 going too far with the ridiculousness that was definitely the strength of SR3, but Volition somehow managed to pull off an even more ludicrous setup whilst maintaining the spirit and quality of writing found in Saints Row: The Third. While there may not be as many great set piece moments as could be found in SR3, the majority of the story operates at a consistent high, largely due to the incorporation of as much ridiculous super-cyber actions, as many references to other media and callbacks to previous games as they could fit into this telling of "The Matrix w/ Aliens".

That said, Saints Row IV is by no means just a series of cultural references and callbacks. The series' trademark self-awareness makes the referential humour… well, humorous. The callbacks come in the form of substantial character stories and appearances, allowing the player to learn far more about the various Saints members that have accompanied their adventures through three previous titles, and revisit some of these adventures. For this reason, there is definitely more enjoyment to be taken from the story if you're familiar with previous Saints Row games, but there's enough in there to understand what's going on for those that aren't so well versed. The game does lean quite heavily on these references to past events though, and while that's not a bad thing for your enjoyment or for the expansion of the series' characters, it does add a great deal to that "not quite it's own game" feeling.

The great writing and fun gameplay of Saints Row IV are unfortunately undermined by some technical issues. The console versions, whilst definitely playable enough to enjoy, are seriously lacking when held up against the PC release. This is most apparent in the later game when your character is moving very fast and a lot of explosions or black holes are occurring rapidly all around you; the console frame rate has some trouble keeping up. In my experience it wasn’t intolerable, but once you've seen how smooth it can be, it's hard to go back. Ultimately, if you can play this on PC, do so, but consoles are still viable if you don't have a choice.

Unfortunately, I also fell victim to another, rather more serious, technical issue where about a dozen times across my ~20 hours of playtime the entire game would freeze up whilst I was browsing somewhere in the menus. Thankfully, due to the autosave system, the way in which missions work and the fact it only happened in menus, I never lost any progress. To resolve this, I would be forced to exit to the dashboard and restart the game each time. Very irritating, I can assure you, but I suppose it could have been much worse.

Saints Row IV managed to live up to some very high expectations, despite some potentially difficult roadblocks in its development, and some unfortunate technical issues. Without these issues, or without the regrettably reused setting/reliance on previous stories, I would have perhaps held this game in even higher regard than Saints Row: The Third (one of my favourite games of 2011). As it is, however, Saints Row IV is a great game that falls just short of amazing. That or it's an amazing expansion that falls just short of a game.