Internal Robots > News > E3 2013 > Some Things Microsoft Should Have Said 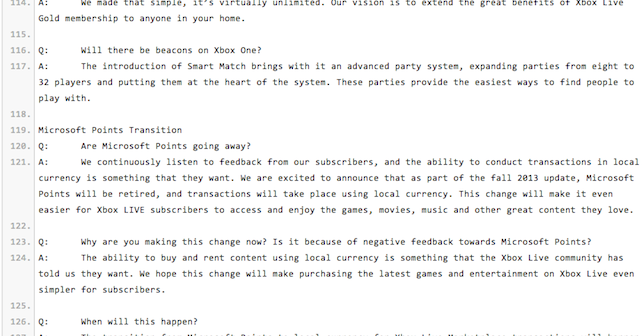 To provide you all with an understatement: Microsoft’s messaging has been less than stellar of late.

Yeah, it takes skill to fuck up “It’s Steam, but you can trade your games and play your friend’s games!” as a core message.

Well a leaked Xbox One PR document has a few more answers for you. It unfortunately does not clear up some of the undefined terms of confusion, but it does offer a few nuggets that definitely could have been… well, I don’t know, mentioned at all by Microsoft.

You can find the document here. A lot of it is standard PR “we’re not talking about this right now”, but there may be something relevant to your individual interests in there, and here’s a sample of some of the more interesting things I’ve pulled out below.

Q: How much will standard retail games for Xbox One cost?
A: Microsoft Studios games on Xbox One will be $59.99 (MSRP).

Q: How much cloud space do I get? What is stored in the cloud?
A: Xbox Live offers Xbox One unlimited storage space in the cloud. Every piece of content—your profile, games, Achievements, and entertainment— can be stored and saved in the cloud so you can automatically access it anywhere, anytime, no matter where you are.

Q: How many people can be signed in to Xbox Live on a single Xbox One at one time?

A: We made that simple, it’s virtually unlimited. Our vision is to extend the great benefits of Xbox Live Gold membership to anyone in your home.

Q: What happens to my Microsoft Points?

A: When the transition takes place, the balance of Microsoft Points in an account will be retired and the customer will be given an amount in local currency that is equal or greater in Marketplace value. That value will be stored in your account and can be used similar to Microsoft Points to make purchases in the Xbox Live Marketplace.

Q: Will there be advertisements built into the dashboard like Xbox 360? How many?

A: We designed the Xbox One dashboard to make your favorite games and entertainment even more front and center. Advertisements will not be visible on the home screen, so you only see what’s most important to you.

Q: What about XX country? When will Xbox One be available there?

A: We plan to launch Xbox One in our other Xbox markets later next year.

Q: Can a household purchase one Xbox Live Gold subscription and share between multiple family members? Do you have a Family offering?

Q: Are the two buttons in the middle of the controller still the back and start buttons, or do they have different functionality?

A: The two buttons in the middle of the Wireless Controller are Menu and View buttons.  The Menu button (on the right) will bring up context-specific menus, which game and app developers can design to enhance the user experience. The Menu button could also be used in scenarios such as bringing up in-game menus, showing video playback options, and accessing commands on the console’s user interface. The View button (on the left) will change views or provide more information in games and apps. The function of the View button will be driven by developers. Possible uses of the View button include viewing a map during a role playing game, displaying a leaderboard in a first person shooter, and enhancing the navigation of the console’s user interface.

A: With Game DVR, it’s easy to capture your greatest game moments, then share them with your friends. We will also provide consumers with tools to edit and create videos, and because each capture is automatically tagged with contextual game data, game creators will be able to use the captured clips in-game. Xbox One keeps a rolling record of your most recent gameplay, so you can share replays with friends or check out your friends’ replays of their best move.